One of the more popular characters in the DC Universe today is Beast Boy of the cartoon series “Teen Titans” from ten years ago and the wildly popular “Teen Titans Go!” of today.

Before joining the Teen Titans in the late 1970’s, Beast Boy (aka Changeling) first appeared in an issue of The Doom Patrol.

In the story, their boy is stricken with a disease called Sakutia. His father injects his son with some solution that, although cures him, it causes his skin and hair to turn green. It also gives him a super-power that allows him to rapidly evolve into different animals and insects.

Later the boy reveals his power for the first time when as a snake was threatening his mother, Garth changed into a mongoose and attacked the snake. 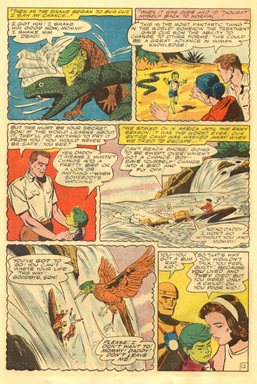